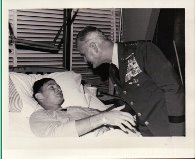 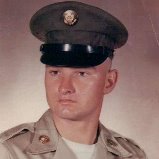 The following story was printed in the winter 2010 issue of "The Wolfhound Pack", a magazine devoted and published for all present and past Wolfhounds.

Being successful in everything a Wolfhound starts isn’t anything unusual. Also, stories of great accomplishments from everything from the battlefield to the civilian workplace will not surprise any Wolfhound, present day or past. But I want to tell about a special friend of mine that I knew long before he joined the 27th Infantry.
Bob Brewster grew up on a farm a few miles from me and we graduated from the same small town Mid West Missouri high school. Even though I am four years his senior, being such a small town, everyone knows everyone.
I returned home from Vietnam in January 1967 and started my life in the world. Bob entered the Army in 1969 and I got to visit with him just before he left. When he arrived in Vietnam he was immediately sent to the 2nd Bat 27th at Cu Chi where he joined C Company 3rd Platoon. On August 19, 1970 while on patrol in Ho Bo Woods, Bob tripped a booby trapped 105 round and lost a leg. After a year in the VA hospital after healing his many wounds and with the remaining leg they saved but it had been fused at the knee, he finally got to come home to Adrian, his family and his farm. His wife decided she didn’t want to be married to a “cripple” and also not to be around when he got home.
So here’s the Wolfhound tough part that probably won’t surprise many old Hounds. Bob started up his farm again, only this time with hand operated John Deere tractors and combines. Of course, being the good mechanic he is, he fixed them all up himself so he could operate them. Bob remarried and with his beautiful wife of 30 years at his side, he still runs 75 head of beef cattle and builds his own fence etc. Bob never complains and when asked about the loss of the use of his legs he just says, “Hey, I just had a bad day”.
Oh yes, working a farm isn’t quite enough for Bob, so for 20 plus years he has drove a rural mail route of 120 miles with 400 stops, five days a week. He uses Chev S 10’s with hand controls. That job alone is a good hard 8 hour work day.
So I have been trying to get him to a reunion ever since my first one in Phily. Like the rest of us, he didn’t know what to expect and was apprehensive to say the least. Bob and Barbara did attend the Branson reunion this year. He hooked up with some C Company guys and had some great visits with many of the other Hounds. Bob called me a few days after we got home and said to me, “Don, for the first time, I felt like I had come home”.
Bob drove out to my farm last week and in our visit he told me he was all ready for the Colorado reunion next year! Like the rest of us, he’ll need his annual fix from now on!
Bob’s not crippled. He just doesn’t have the use of his legs anymore.
Wolfhounds don’t quit, not ever. Nec Aspera Terrent