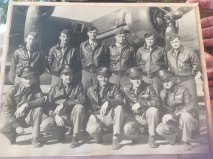 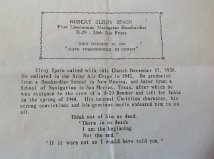 Lieut. Robert Elroy Spain, navigator-bombardier on a B-29 superfortress, as killed October 22, in a plane crash t an airfield in China, according to a telegram received Saturday morning by his parents, Mr. and J. M. Spain, Butler. Lieut. Spain was a member f the 20th Air Force with headquarters n India, but at the time of the disaster was temporarily based in China.
In the spring Of 1944, Lieut. Spain went to India, where rear bases axe be-constructed for the giant four-engined bombers which were striking t the mainland of Japan. The 20th ir of which he was a part, made the first historic raid on Japan ast June by bombing Japan's largest steel mills at Yawata, on Kyushu Island.
Elroy enlisted in 1942 and chose the t perilous branch of She service to prove his loyalty to his country. He graduated from a bombardier school in Roswell, New Mexico, and later from a school of navigation in San Marcos, Texas. Elroy was one out of ten men who volunteered for training as members of' the crew of a B-29 bomber when the plane was still in its experimental stage. After weeks of intensive training on this Superfortress at the Pratt, Kansas, army base, he left for overseas duty in which he served for seven months'
Elroy was born January 18, 1919, and united with the Christian church in December of 1930. He was 8 faithful Christian, practicing the faith he professed. He graduated from the Butler high school with the class of '37, and so afterward accepted a position with the Ketz Drug Company in Des Moines Ia.

Only one man survived the crash. He was the camera man.The rest of the crew perished at the crash site.